“Only through repenting and reforming we can eliminate all enmity and resentment.”

May all living beings enter the door of compassion, may their bodhi roots grow and may faults be repented of.

As Gold Buddha Monastery’s Buddha hall expansion and renovation is coming to an end, we would like to present another gift – you are invited to attend Dharma Master Heng Chih’s lecture on Guan Yin Bodhisattva’s Fourteen Fearlessnesses.

Venerable Master Hsuan Hua said: “If you do not listen to dharma lectures, you will be unable to open your wisdom. This is especially true of the Shurangama Sutra, for it is the sutra that can open one’s wisdom. Hearing these principles, you should apply them to yourself. ‘Through which sense organ should I cultivate?’ you ask. Don’t worry. Guan Yin Bodhisattva uses the ear organ; it is also the best one for us. Guan Yin Bodhisattva perfected his cultivation through the ear organ and Ananda followed him in cultivating the same way. The Buddhas and Bodhisattvas of former times have left us with such a wonderful dharma door that we should also study this method. This is the easiest practice in cultivation.”

All talks are in English with Mandarin Chinese translation.
Guan Yin Bodhisattva’s fourteen fearlessnesses as presented in the Shurangama Sutra:

World-Honored One, through the effortless, wondrous power of my vajra-solid Samadhi, which I enter by redirecting my faculty of hearing inward to merge with the enlightened nature of hearing, I feel, as if they were my own, the sorrows and yearning of all beings in the six destinies in all ten directions and in the three periods of time. Therefore, by using both body and mind, I can cause all beings to develop such perfect merit that they will have nothing to fear in fourteen kinds of dangerous situations.

First, because I did not listen to sounds and instead contemplated the listener within, I can now hear the cries of suffering beings throughout the ten directions, and I can bring about their liberation.

Second, I was able to turn my awareness around and restore it, and therefore, should beings be caught in a conflagration, I can make sure that they are not burned.

Third, since I was able to turn my awareness around and restore it, I can make sure that beings who are adrift in a flood will not be drowned.

Fourth, because I have put an end to deluded acts of mind, and so have no thoughts of harming or killing, I can make sure that any being who enters the realm of ghosts will not be harmed by them.

Fifth, when I had succeeded in merging my faculty of hearing with the enlightened nature of hearing, my six faculties dissolved into each other to become one with my faculty of hearing. Therefore, if beings are about to be attacked, I can cause the attackers’ blades to shatter so that these beings will suffer no hurt, any more than water will be hurt by a knife that is plunged into it, or any more than light will be affected by a puff of wind.

Sixth, my hearing was infused with an essential brilliance that illuminated the entire Dharma-Realm and dispelled the darkness of all hidden places. Therefore, I can ensure that beings will be invisible to any yaksas, raksasas, kumbhandas, pisacas, putanas, or other such ghosts that might approach them.

Seventh, sound itself completely dissolved as I reversed the direction of my hearing and became free of distorted perceptions of sense-objects. Therefore, if a being is confined by a cangue, I can make that disappear.

Eighth, when sound was extinguished once and for all and my hearing was perfected, my kindness gained an all-pervading power. Therefore, should beings be traveling on dangerous roads, I can make sure that they will not be robbed by highwaymen.

Ninth, once my faculty of hearing had become merged with the enlightened nature of hearing and so had gained independence from perceived objects, then no object, no matter how enticing, could affect me. Therefore, I can cause beings who have a great deal of desire to break free of their desire.

Tenth, once sounds were so purified that they ceased being objects of perception, then the ear-faculty and its objects became completely interfused so that there was nothing that perceived and nothing that was perceived. Therefore, I can cause beings burdened by anger and hatred to be free of their enmity.

Eleventh, once perceived objects had disappeared from my mind as I turned the light of my understanding inward, my body and mind and the entire Dharma-Realm were as bright and translucent as crystal. Therefore I can bring freedom from stupidity to beings whose natures have been so darkened by their dullness that they have had no intention of ever becoming enlightened.

Twelfth, once perceived objects became interfused and returned to the enlightened nature of hearing, I could travel to distant lands without leaving the place for awakening, and all at the same time, without any disruption, I could travel among the worlds. There I can make offerings to an infinite number of Buddhas throughout all ten directions and serve each of these Buddhas as a Dharma-Prince. For that reason, should childless beings anywhere in the ten directions wish for sons, I can cause them to have sons who will be virtuous, blessed, and wise.

Thirteenth, once my six faculties perfected an interconnected functioning and became united in their capacity to clearly perceive everything in all the worlds throughout the ten directions, my mind became like a great flawless mirror that reflected the emptiness of the Matrix of the Thus-Come One. I reverently served an infinite number of Thus-Come Ones and thoroughly mastered esoteric aspects of the Dharma. Therefore, should childless beings anywhere in the ten directions wish for daughters, I can cause them to have daughters who are upright, blessed, virtuous, compliant, wholesome in appearance, and liked and respected by all.

Fourteenth, sixty-two times as many Dharma-Princes as there are sand-grains in the River Ganges appear in each of the worlds of this system of a billion worlds, with its hundreds of billions of suns and moons, to practice the Dharma and to act as exemplars in order to teach beings how to transform themselves. With skill and wisdom, these Dharma-Princes respond in various ways to what various beings require. I have broken through to the fundamental source of my ear-faculty, thus revealing the ear as a gateway to the wondrous. My body and mind, in a subtle and wondrous way, have encompassed and pervaded the Dharma-Realm. Therefore, I can cause someone who recites my name to gain as many blessings and as much merit as someone else would gain from reciting the names of all those multitudes of Dharma-Princes – sixty-two times as many of them as there are sand-grains in the River Ganges. The blessings and merit that those two reciters will gain will be the same. World-Honored One, because, by means of my spiritual practice, I have completely broken through to enlightenment, the power of my name alone is equal to the power of all those many other names.
In this way I cause beings to develop such merit that they will have nothing to fear in fourteen kinds of dangerous situations. 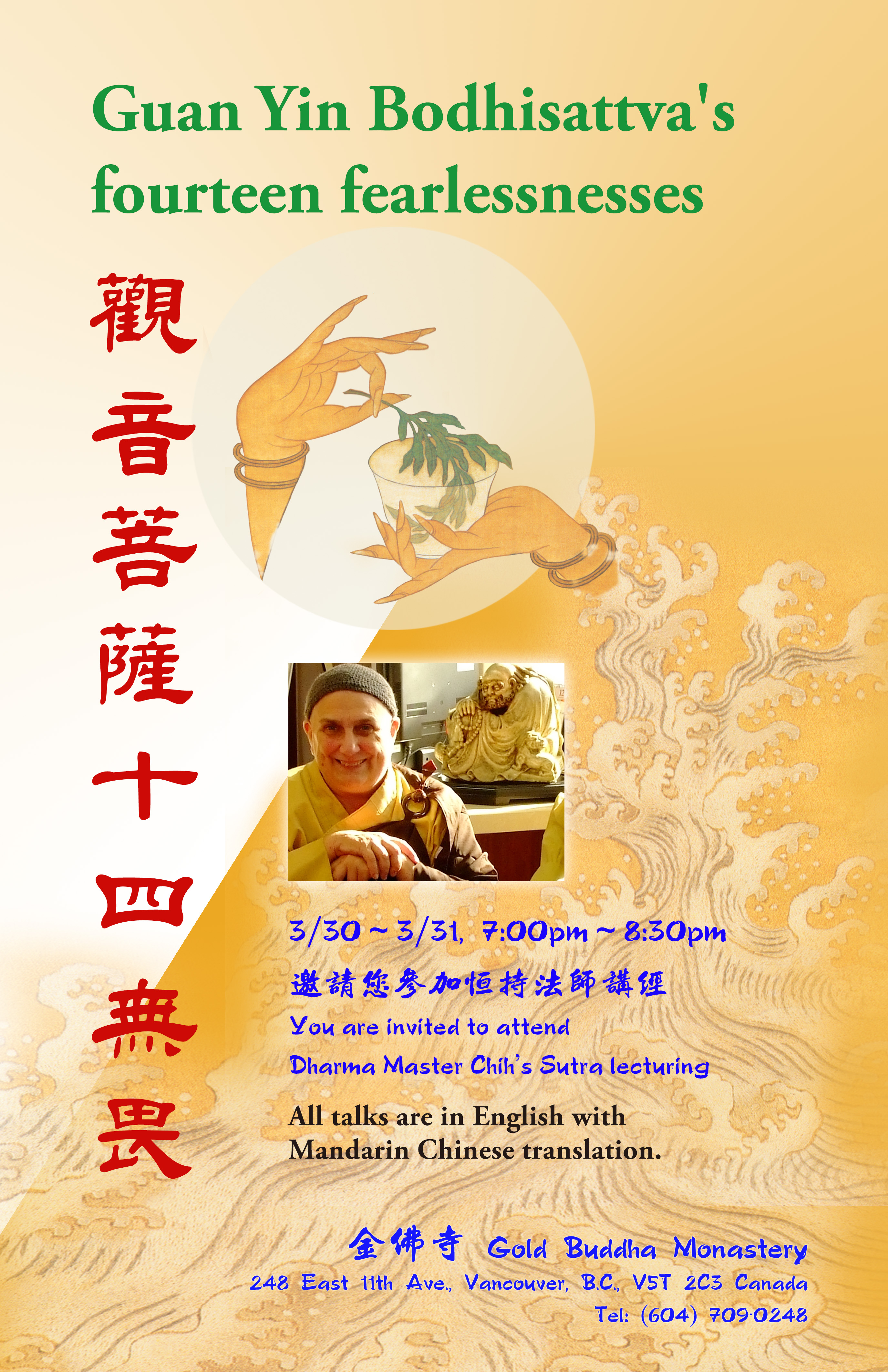