By Editorial Staff
Translated into English by Stephanie See

Welcoming all living beings, Gold Buddha Monastery first opened in the spring of 1984 in Chinatown on East Hastings Street and later moved to East 11th Avenue in the year 2000. However, for the past few years due to the old building, the monastery experienced a lot of water leakage and required emergency maintenance. In addition, the Buddha hall has gradually been meeting its maximum capacity. After several rounds of communications and consultations, the expansion plan for the Buddha hall was finalized. This new expansion includes: (1) a 12-foot bronze Vairochana Buddha to be placed at the center of the hall; (2) ten thousand Buddhas from the five directions on the surrounding walls, each 12 cm x 12 cm plated in gold; (3) a 3-foot bronze Maitreya Buddha in the dining hall; (4) 18 stone arhats in the courtyard; (5) 4 great Heavenly Kings; and (6) Wei Tuo Bodhisattva and Qie Lan Buddhisattva to protect this monastery that upholds the proper dharma.

The plan for the expansion was approved by board of directors of the Dharma Realm Buddhist Association in May of 2009. By October 2010, the monastery received approval for land use, building plans, and construction permits. April 29 of this year, the city of Vancouver officially approved the expansion plan. The construction for the extension will start from our current parking lot and the roof will be gold in color. We estimated the work to be done in half a year. After the work is done, we would then combine the current Buddha hall with the extension. The total area of the golden hall will be 5,500 square feet; and it will truly be a “Gold Buddha” Monastery. 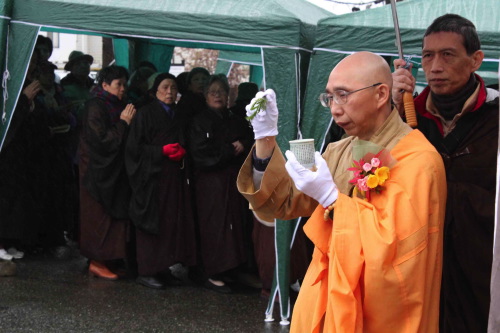 On the day of the ground breaking ceremony, it continuously rained but it did not stop many dharma protectors from coming to join and rejoice on this assembly. From early in the morning, they started setting up tents, helped in the kitchen or helped prepare for the ground breaking ceremony. The ceremony started at 8:30am, the Dharma Masters led the assembly in reciting the Great Compassion Mantra in the Buddha Hall, using the mantra’s power to pray for today’s ceremony so that it would run smoothly. After that, they circled the monastic ground, sprinkling the ground with purified water so that those who were attending the ceremony and volunteers would also be purified. 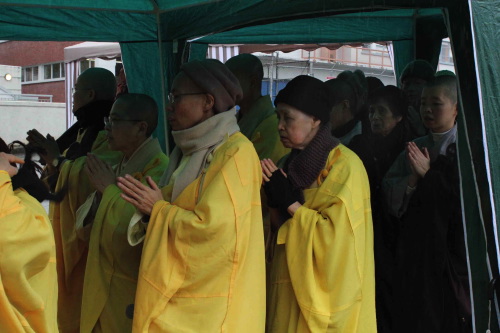 At 10am, the ground breaking ceremony started. The Dharma host, Bhikshu Heng Chiang, lit incense and prayed. After the prayer, the rain suddenly came down and the whole sky became translucent and cool. We believe the dragons and heavenly protectors knew that great Buddha’s work was about to begin. After that three Dharma Masters put on gloves, each holding a shovel and started digging the soil, starting the ground breaking ceremony. 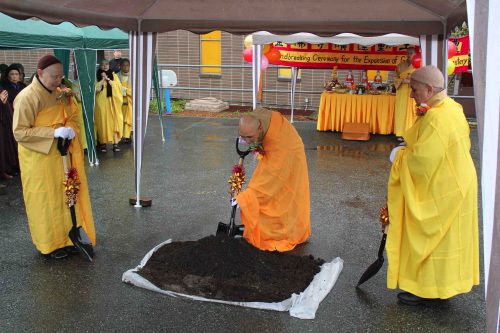 At the end, a group of volunteers of Gold Buddha Monastery performed a splendid taiko drum performance. With sincere and steady drum beats, beat after beat vibrating people’s mind—all the way up to the clouds, as if speaking to heaven and earth—for the sake of Gold Buddha monastery, let the proper dharma stay in the world, let the dharma wheel be turned so that its foundation would be solid. At the end of the ceremony, we invited the three Dharma Masters to speak during lunch. 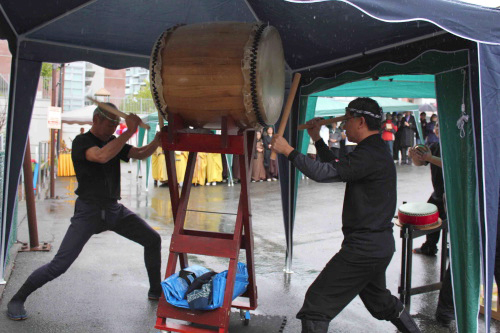 Dharma Master Heng Chih said: Breaking the ground is a ceremony, but the meaning is deep. As said in the Earth Store Sutra, “Breaking the ground is like inviting the host of the ground to protect and support” Gold Buddha Monastery for a smooth expansion. The “earth” has ten qualities: (1) vast and great, (2) relied upon by sentient beings, (3) not given to likes and dislikes, (4) acceptance of great rains; no matter how much rain falls or how big snow falls, the earth could bear it; (5) enables vegetation to grow, (6) a repository for seeds; all the seeds are buried underground, (7) harbors many treasures, (8) yields various medicines, (9) unmoved by blowing winds, and (10) not startled by the lions’ roars. I wish that the earth will have many qualities to protect and support Gold Buddha Monastery.

Dharma Master Heng Liang said: Although the ground breaking ceremony was only an hour, but the meaning is important and big. The Venerable Master in 1980 had lectured: “This year is not a good year, there were a lot of big disasters that  happened. But everyone should focus on the good; do more good deeds, then disasters would not happen.” All Dharmas are impermanent. This is the philosophy of Buddhism and is different from other religions. Whether in the future we would encounter good or bad would depend on how we do things. If we do something good, a great meritorious deed or build a Buddha hall, then (our future) will change. And so, in this process, even if we encountered small obstacles, it is okay. We should “accord to conditions and not change” and continue moving on until the job of the Buddha hall is finished. Actually, the hard part is not finishing the job, but managing our mind — don’t get angry, be compassionate, be patient and have a proper conduct.

Dharma Master Heng Chiang said: The rain was very good and very delightful, because the heavenly dragons and the eight divisions had brought down sweet dew of dharma rain to purify the earth, so that everyone would feel cool. This rain also showed the sincerity and dedication from everyone and the Dharma Masters who were not afraid of wind and rain to finish the ceremony. In China, rain is very precious because general water resources are scarce, unlike in Canada where water is abundant.

In addition, the ground breaking ceremony also has another meaning and that is it represents Gold Buddha Monastery for the past 20 years, all past and present managing hosts and dharma protectors who strived to protect the monastery and let their dharma work has flourish. That is why after 20 years the monastery is able to expand further. All the Dharma Masters together with the laity are able to build a new Gold Buddha Monastery. After extending the Buddha hall, they would be able to gather in more living beings, can receive the benefits of the dharma, end birth and death, leave suffering and attain bliss. Lastly, everyone should take the merit and virtue of this ground breaking ceremony and transfer it to living beings of the dharma realm, to attain dharma bliss, increasing their blessings and wisdom, and attain Buddhahood.